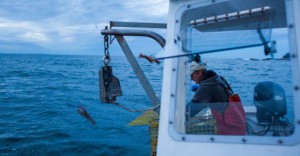 Yvonne Rosen, a member of the IAM’s Maine Lobstermen’s Union, tosses back undersized lobsters while pulling traps off the coast of Maine. (Courtesy: Craig Dilger for The New York Times)

The IAM’s year-long campaign to help establish the Maine Lobstermen’s Union was given extensive print and photo coverage in the October 10 edition of the New York Times. The article, titled “Some Wary as Lobstermen Unite,” dominated the front page of the paper’s National section and described how organizers signed up more than 600 men and women to create the first IAM local lodge dedicated exclusively to Maine’s lobster fishermen.

Lobstermen in Maine are reeling from a glut in lobsters that has driven the price to a 40-year low, leading many to question how long independent boat owners can survive.

“The Times article gives a little too much space to those who oppose unions and think lobster fishermen should remain independent, isolated and unorganized,” said IAM Eastern Territory General Vice President Lynn Tucker. “Maine’s lobster fishermen are certainly independent but they’re smart too. They know the best way to have influence in this tightly-controlled industry is to join together to protect their jobs and their way of life. That’s what’s on the line here and the article does a good job of telling that story.”

Early this year, a group of lobsterers from Maine met at IAM’s William W. Winpisinger Education & Technology Center to plan their organizing effort. Click here to see “Maine Lobsterer Planning Program” on the Machinists News Network (MNN). MNN was also there in the spring when the IAM’s Maine Lobstering Union scored two legislative victories on “dragging” and licensing for lobsterers serving in the armed forces.