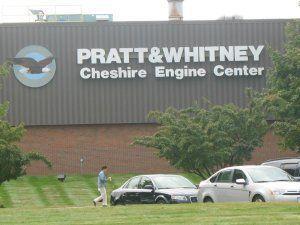 Pratt & Whitney’s Cheshire Engine Center is seen at 500 Knotter Drive in Cheshire in this file photo. The company shut down the Cheshire plant, and an engine repair shop in East Hartford, in 2010, shifting hundreds of jobs to Georgia, Singapore and Japan. David Krechevsky Republican-American

HARTFORD — As jet engine manufacturer Pratt & Whitney and the Machinists Union begin negotiations Thursday for a new contract governing pay, benefits, work rules and other conditions, the top issue will be jobs.

Neither company nor union representatives would discuss the issues expected to dominate negotiations, but union officials have said they may not recommend a contract for ratification without specific language about the number of jobs.

“If management does not come to the bargaining table with a commitment to keep our jobs in Connecticut, you will have a crucial decision to make,” the union said in a message on its website to members this summer. “If management continues to ignore covered work and past commitments, how can the committee recommend a contract?”